Rows upon rows of fresh fruit and veg are at the Suva Markets.

They sell things by the 'heap'. So a heap of pineapples has about six pineapples in it. A heap of mangoes has 4, a heap of pawpaws has 5. If the heap can fit in or balance on a plastic bowl it does. Everyone seems to use the same standard measure and the prices have very little variation. A heap of pawpaws was FJ$2. There were bigger ones for FJ$3 but they didn't fit in a plastic bowl.

Everything here seems to come in a miniature size,  except for the breadfruit. The pineapples are small and ridiculously sweet. A small one, once peeled is a bit larger than a big apple. It is like all the fruit comes in individual portions. My grandmother always said good things come in small packages and when it comes to fruit here, that is true. I don't know if the farmers are too impatient to let the produce grow any bigger or it's to do with environmental adaptation but the results are delicious. 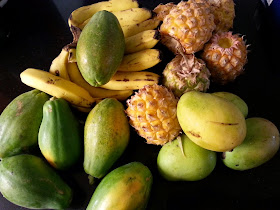 One of the great things about finding accommodation before arrival is that settling in and meeting people is easier. There is plenty of Fiji time happening already so if you layer that with not being able to find a place to live and having to work out sim cards, phone credit, exchange rates, bank fees, internet, food supplies, etc time would be gobbled up very fast and the process of settling in would take longer. 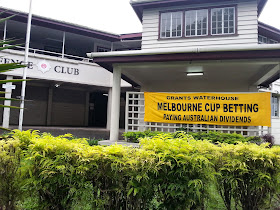 A group of volunteers came in earlier this year. It took them weeks of living with bed bugs before they could find suitable accommodation that had some sense of permanency to it. Apparently the easiest way to find accommodation is by word of mouth which kind of makes real estates defunct for rental purposes.

Tuesday rolls on and it is Melbourne Cup day, 4 November. Since my arrival I have seen banners advertising betting for the Melbourne Cup. Indonesia is a non betting country so this advertising surprised me on my first day.

I visit the Fiji Museum. It is set at the rear of an area called Thurston Garden. When I arrive the gardens are being 'mowed'. With whipper snippers. Grass grows quickly in the tropics so I get the need for regular maintenance but a whipper snipper? Vast tracts of land. Whole backyards, parks, gardens.

At least these guys were wearing knee high boots, long protective aprons, goggles and ear muffs. The other day it was a barefoot operator with no protective gear at all. Mind you, I never saw a mower the whole time I was in Jakarta but it isn't renowned for its abundance of park areas.

The museum is interesting enough.

It touches on when the islands were settled, colonisation, independence and races and religions.

With a small side serve of nature.


Happy New Year is an Indianised version of Oceans 11. It is blinged to the max with 100 costume changes, includes a vomit-worthy romance, and a secondary story of winning the world dancing competition set in Dubai with luxury everything. Not only do the Indian actors overact, the storyline runs just short of world domination because their martial arts skills are better than their Asian counterparts, their motivations are righting wrongs and saving dying parents, while they are rescuing a child in danger (enough to be elevated to cult worship status) and teaching virtuous skills to small children. Oops, don't stop there! The icing on the cake was they won the World Dance Championship (they got into it through vote rigging and then a pity vote, not for their talent) and their 'dancing' evolved into badly overlaid singing to win. WT....?

That is three hours of my life I will never get back. I now harbour no regrets that I never went to see the Sunday afternoon Indian movies at the Grand Indonesian cinema whilst in Jakarta. But there is obviously a market for crass movies. I'm just not in the target audience.

Sushi and sake rounded off the day.

Other sights around town include the Grand Pacific Hotel. Set on the waterfront it screams opulence. The story is that it was closed for many years and has been refurbished and reopened recently.

The staff are dressed to impress. The dude that opens car doors is hard to miss with his hat.

Of course, there are the obligatory KFCs and McDs around as well as Gloria Jeans coffee shops.

Mixed in with a sikh temple, a mosque and numerous churches Suva is a visual landscape of diversity.

You can walk most places although for me it is mostly downhill going initally. Loaded up with groceries or shopping means a taxi ride back up the hill. While the centre of town is flat it is only a few streets back from the waterfront where the climb begins.

From another angle I walk down to the University of the South Pacific (USP) to check out their campus and bookshop.

And from there it isn't far to another shopping centre with cinemas.

The cinemas are reasonably cheap. Regular cinemas at about FJ$6.50 with the reclining chair cinemas being FJ$10. Much cheaper than Australia but not as cheap as Jakarta.

Like Jakarta, there are security guards at apartment blocks. Unlike Jakarta ones, they aren't smilers or greeters.

It is a shame because they are the first point of contact. I see on an expat facebook page that this is a regular complaint.

I've also heard but have not yet experienced the shop stalkers.

I got used to this in Jakarta when you would have a shop assistant at your elbow every step of the way. At times it was an invasion of personal space, it gave the impression you weren't to be trusted and when they started suggesting what you should buy when you were only browsing was nothing short of annoying.

I did experience here though, the cash register chick ringing up the goods and then passing them to the security guy who checked the product(s), in my case there was only one product, and he checked the register receipt and then stamped it before I could depart. Mind you he stood beside her and watched her ring it up as well. A bit of overkill for a packet of stick on hooks.